The design is set to be central London’s longest pier, the 23rd serviced by the MBNA Thames Clippers riverboat service, and now it’s an award winner. The New London Awards, which are organised by New London Architecture and supported by the Mayor of London, celebrate cutting-edge architecture across the capital. The awards judges described Royal Wharf Pier as “an elegant pragmatic piece of design” and recognised its potential to help promote sustainable travel on the Thames. “I think the river is, by European standards, very underused,” said Bill Price of WSP, the expert assessor for this awards category.

Conceived by London based architect, Nex, following a high profile competition, the design is a contemporary response to one of our best loved structures: the traditional British seaside pier. As well as serving as transport infrastructure, the pier is part of the public realm, a linear public space where visitors can promenade, relax and take in the river views. They will be able to enjoy the sights from a 162m2 viewing platform, complete with seating finished in marine grade timber.

The viewing platform will connect to a floating gangway and the terminal pontoon, with its angular metal-clad shell, where riverboat travellers will be able to sit and wait in comfort. The pier, which is under construction, will enhance the experience of the river for travellers, residents and visitors, and will transform a site formerly occupied by a derelict jetty.

Royal Wharf Pier was recognised alongside major projects, including the new Hackney Wick Station, in the New London Awards. The designs for all shortlisted and winning projects in the awards are on display in an exhibition at the NLA Galleries, at The Building Centre, in London, from 26 July until October 2019.

“Major new infrastructure like our Royal Wharf pier is a game-changer for east London’s connectivity - for north to south of the river, and into central London. Non-road travel is an essential part of the sustainability and growth of London’s commuter network, and this pier will soon be a part of that. Nex- has done an incredible job on the design, which has now been duly recognised by the NLA. Now that construction is underway, the vision is one step closer to being realised.” 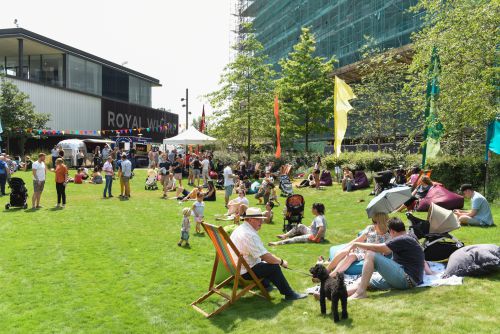