Big and bold: that’s the best way to sum up the regeneration delivered by Ballymore and development partner Oxley Holdings in Dublin’s Docklands area. After five years of construction activity, a site in the North Docks fronting the River Liffey has been dramatically transformed into Dublin Landings, a city quarter with almost 100,000 square metres of office, retail and residential space spread across 13 buildings in all.

The scheme is remarkable both for the scale and ambition of the transformation. Looking at Dublin Landings today with its garden squares and diverse mix of apartment and office buildings, it is already hard to visualise its past. But this 2.3 hectare site was actually part of Dublin Docklands’ industrial heartland, which spread across more than 500 hectares on the northern and southern banks of the river. Regeneration has brought transport infrastructure to the area, in the form of the LUAS light rail extension, and has attracted new businesses from the tech and financial sectors, making it today one of the best connected areas of the city for business and living.

Recognising the area’s strategic importance for Dublin, Ballymore took a placemaking approach to developing its site, choosing its masterplan architect via an international competition. The competition was won by the Copenhagen practice of ARROW Architects, which came up with a Scandi-influenced masterplan that both reconnected the site to its history and the River Liffey and introduced richly varied streetscapes. Dublin-based RKD Architects was also brought onto the team to help translate this Scandinavian masterplan to its Dublin context.

ARROW’s masterplan includes a diverse collection of buildings, each one highly individual in its detailing and materials and incorporating such unusual features as ‘urban villas’ – two storey houses that perch on top of apartment buildings to form spectacular penthouses. “Every building has its own personality and its own cladding solutions, using combinations of aluminium, glass and brick predominantly,” explains Paul Carty, Director of Construction at Ballymore. The final design and finishes for every building were, therefore, the subject of much deliberation. “Our chairman Sean Mulryan was very passionate about getting the facades, colours and textures of the buildings right and a lot of thought went into that,” continues Carty. “Sean visited the site frequently so there was a very hands-on, senior management approach by Ballymore.”

Careful design and detailing of the buildings have resulted in a scheme that Carty describes as “hand crafted”. He explains: “These are very traditional buildings, which has made it harder for us to construct them. We have lots of hand laid brickwork, cladding systems are bespoke and even the balconies are not standard.” It is this quality that really sets the development apart, he believes. “Other developers will build 300 apartments all the same. Ballymore has set a very different tone with this development. This has a boutique feel to it. It is clearly is a piece of craft and is a statement of what we can do.”

Constructing a new neighbourhood on this scale in a city would inevitably present its challenges, with Carty explaining, “It was a tight urban site with access being restricted by the LUAS tram and a bus corridor.” To facilitate delivery, Ballymore opted to build the homes itself, while it procured a general contractor to construct the commercial element. That meant around 1,000 workers were working on both the residential and commercial build at the peak of site activity, until the pandemic came along. “We were only half way through the residential build, with only one of eight blocks handed over, when Covid arrived,” recalls Carty. “We had to change our way of building very significantly. As the building layouts are very cellular, we had to have one person working on an apartment instead of 10, for example. It was a challenge to meet the programme and observe Covid protocols, but the staff were extremely diligent and performed exceptionally well.”

The completed development comprises 298 one, two and three bedroom apartments plus resident amenities, 70,000 square metres of office space and 1,600 square metres of retail and leisure space. Investor Greystar acquired the homes for its private rental portfolio, while occupiers of the commercial space include The Central Bank of Ireland, National Treasury Management Agency and co-working space provider WeWork. One office building that was sold to property company IPUT Real Estate now includes Microsoft among its tenants.

All the commercial space was let or sold ahead of the scheme’s completion. “We reached out to businesses who we wanted to attract here, as well as those who we knew were looking for new space in the market. It was about being transparent and sharing our vision with them,” says David Killion, Ballymore’s Development Director. “Tenants and purchasers have told us that they took comfort from knowing they were going to be part of a completed place.

“Our vision was to create somewhere which raised the bar in Irish architectural design, helping Dublin’s docklands meet the standards of other global financial centres,” Killion adds. With its distinctive buildings and a new ‘urban wild’ landscape of wildflowers, herbs and grasses growing up in the squares and streets threading between them, the neighbourhood is already rapidly taking on the look of an established place. 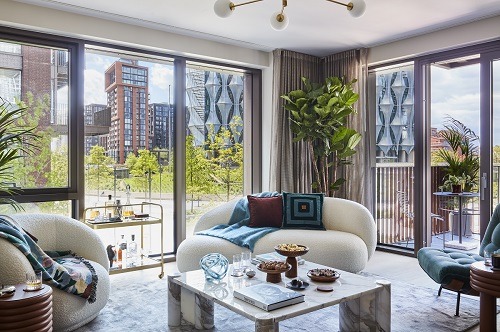 The Courtyard Collection at The Modern is a stylish finale for Nine Elms neighbourhood.