The buildings are part of the second phase of the mixed use Embassy Gardens scheme (EcoWorld Ballymore) on a high profile site close to the new US Embassy and the River Thames. The developers brought an international team of experts together to create the pool, working with architects HAL Architects and Arup Associates, structural engineer Eckersley O’Callaghan and US manufacturer Reynolds Polymer Technology. For all involved in the project, the pool’s opening marks the culmination of six years of collaboration to tackle the numerous challenges involved in designing, engineering and manufacturing this highly innovative structure.

The groundbreaking design concept grew out of a conversation between HAL Architects and Ballymore chairman and group chief executive Sean Mulryan. “We were dealing with the practical question of how to put a 25 metre swimming pool on the roof. A single pool of that size would not have fitted on one building,” explains Hal Currey, founder of HAL Architects. “We had a meeting with Sean and the idea of creating the pool as an aqueduct came up and Sean said: ‘If we’re going to do it, then let’s do it properly and make it transparent’.”

The conversation could have ended there. “It was one of those rash ideas that you don’t expect to happen,” says Currey. “But Sean really embraced it.”

Initially, the designers looked at making the pool in steel and glass, but when Eckersley O’Callaghan joined the design team, they suggested using acrylic instead of glass. Acrylic has been used to create some of the world’s biggest and most famous modern aquaria, including a water slide tube through a shark tank in Las Vegas. “The move from glass to acrylic was integral to the project and the final design,” says Currey. “Glass would have involved numerous complexities and fixings. Acrylic allowed us to get rid of a lot of architectural hardware. In terms of clarity and transparency, it allowed us to get close to the original idea. But we didn’t know when we created the first image of the design that it would be possible to use acrylic.”

That first computer generated image showing a view from the ground up to a clear blue pool had been published in the Evening Standard newspaper in London in 2017, exciting global interest. “The intention was to keep the design simple. It had to look as transparent as possible and appear as effortless as possible,” says Currey. Acrylic offered aesthetic benefits as it appears colourless, its refractive index would give the impression of it blending with the water and joints in the structure would not be visible. An acrylic pool would still, however, be complex to design and build. “We faced a combination of challenges: the transparency, the acrylic and spanning the two buildings,” explains Currey.

The final design comprises a 15 metre long acrylic section sitting in steel ‘tubs’ at either end, the tubs providing a base for the pool and also housing the pool steps and essentials such as cleaning equipment and lighting. Bridge bearings under the tubs allow the pool to move as the two buildings on which it sits move. The only other steelwork in the pool structure is the two discreet post-tensioned rods running under the side walls, which help secure the tubs to the acrylic without needing to drill into the latter.

Colorado-based expert in acrylic fabrication Reynolds Polymer Technology played a crucial part in refining the design. Currey gives one example: “The original design had two downstand acrylic beams, but they were removed as the construction evolved. So the pool actually became more aligned to its original design concept.”

The fabricator had to refine its own quality and fabrication processes – and temporarily extend its production facility – in order to deliver the large and exacting project. “Building a pool for London in Colorado was not the easiest thing to do. We were very much in Reynolds’ hands,” says Currey. The pool floor is made of seven cast acrylic panels, joined to create the 15 metre span, and has 3.2 metre high side walls. The overall structure contains 148,000 litres of water, giving a depth of 1.2 metres.

‘If we’re going to do it, then let’s do it properly and make it transparent’

Delivering this project has inevitably been a long and testing process. “There were many times when I thought it wouldn’t happen,” admits Currey. Now that it is complete, he says, “I’m fairly amazed it’s there. I feel a mix of relief and a sense of achievement. The most gratifying thing is that it looks better than it did in the early computer generated images.”

The pool has an obvious value to its location, says Currey. “There are all sorts of things it brings to Embassy Gardens – people talk about it and want to know about it and you hope there will be a social value as a congregation point for residents.” Embassy Gardens’ Sky Deck bar and restaurant on either side of the pool maximise the pool’s social potential.

For the construction industry, the project has value in adding to understanding of the application of non-traditional materials like acrylic. Currey also praises Sean Mulryan for remaining true to his initial vision. “In our industry we are so used to seeing designs value engineered,” he says. “It is not often that you have an idea that gets so fully supported by the client in this way.” 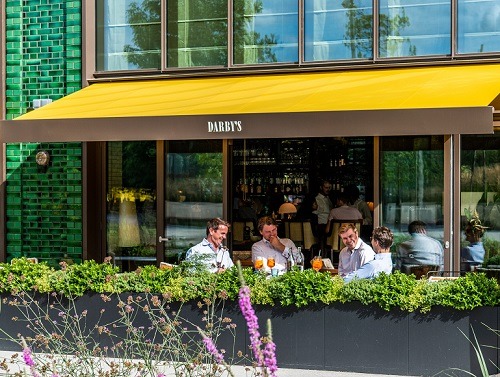