Help for the home turf

The deadline for the Win a Home in London competition is fast approaching, offering one lucky ticket holder the chance to win an apartment at Ballymore’s London City Island development and helping a sports club in Ireland realise a vision. Ballymore is supporting Gaelic football and hurling club Roscommon GAA in its quest to upgrade and extend its facilities, to help it nurture young talent and boost its potential to host big matches.

The competition draw will be taking place on 30 December, making the two bedroom apartment a dream Christmas gift. As the prize draw date nears, interest in the competition is mounting, with Roscommon GAA partnering with London based cultural hub The London Irish Centre and calling on celebrities from the world of television and music to promote the worthy cause.

Roscommon GAA’s home ground, Dr Hyde Park stadium, was opened in 1971 and now needs access, dressing rooms and other facilities upgraded. The club is also one of the few in the country not to have its own centre of excellence providing training facilities and match pitches. It has applied for planning permission to upgrade the stadium, and is finalising plans for the Dermot Earley Centre of Excellence, complete with pitches, meeting rooms and a gym. All it needs is the funds to bring these projects forward and that’s where Ballymore comes in.

The club’s commercial arm, Club Rossie, has a committee of keen volunteers, which works hard with local donors to raise funds for capital development and day-to-day essentials. “But with a population of only around 60,000 in the county, we have to look to other sources of help,” says David Leydon, a member of the Club Rossie team. Ballymore Group Chief Executive Sean Mulryan, whose home town is Roscommon, has long provided much valued backing to the club. “Sean has been an incredible supporter of Roscommon for decades,” says Leydon. “Without him, the GAA would be in difficult circumstances.”

"The GAA is a fundamental part of Roscommon life"

Last year a competition to win a house in Dublin, built by Ballymore, raised more than €943,000 for the club. “It transformed the finances of Roscommon GAA, and we are now in a stable financial position to do the development that is needed,” explains Leydon. “But we needed one more big fundraiser for capital development and Sean has stepped up to support us again.”

This competition – once again offering a home as its prize, but this time at London City Island – is expected to be just as well supported as the last. Sean Mulryan of Ballymore says, “I am very pleased to be able to support the competition, which will raise vital money for the redevelopment of Dr Hyde Park and the development of the Dermot Earley Centre of Excellence in Roscommon”.

The competition brings the GAA’s two projects within sight, and both are badly needed, says Leydon. “Our stadium needs the upgrading to make it fit for purpose for 2020 and beyond and we want to create the centre of excellence for young people in the county.” These projects will be important not only for the town of Roscommon but also for the broader county and its culture, he adds. “When the senior football team in particular is going well it lifts the mood of the whole county. You’ll see the primrose and blue colours on team flags in local gardens. The GAA is a fundamental part of Roscommon life.” 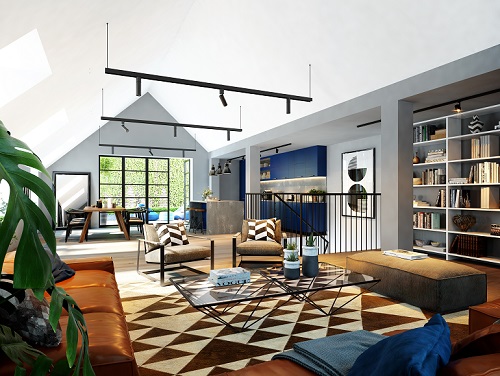 The launch of a collection of eight very special penthouses brings loft luxury to a growing riverside neighbourhood.

As National Apprenticeship Week puts the spotlight on training, Ballymore has become one of the first developers in Tower Hamlets to assist with the delivery of Design, Engineer, Construct!, a learning programme helping to instil an understanding of built environment career prospects in secondary school children.