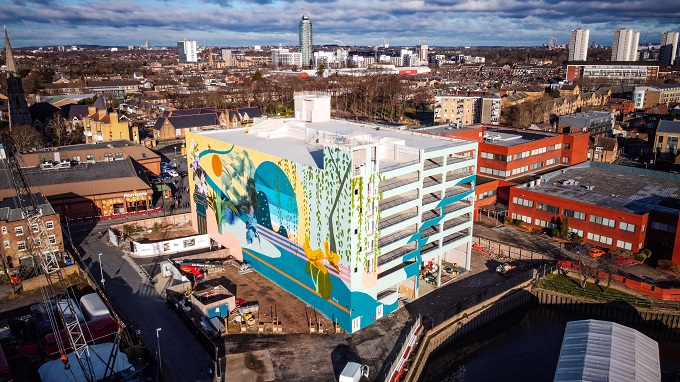 The Brentford Project, a town centre regeneration scheme in Brentford, has commissioned an artwork by UK mural artist, Jo Hicks (professionally known as Hixxy), for the sides of the multi-storey car park building at the gateway to the town’s high street. The temporary mural will be in situ for up to three years, until more permanent cladding is put in place for the building.

Known for her playful, colourful large-scale murals, Hixxy took inspiration from Brentford’s unique canals and waterways for the project. Hixxy – the artist behind London Mural Festival’s West Indian Gazette in Ladbroke Grove – seized the opportunity to create a site specific work that would inject new colour and character into Brentford’s current streetscape.

The mural centres on the town’s connection to the water with a river design which spans across the entire building, paying homage to Brentford’s historic waterways and canals. A range of locally-found plants and wildlife, including marsh marigolds, a weeping willow tree, a kingfisher and a great crested grebe, also feature throughout the mural, while fans of Brentford F.C. will also notice a number of ‘Brentford Bees’ – a nod to the Club’s prominent position in the community. Inspired by nearby Syon House, a neoclassical column intertwined with flowers references the rich history of west London.

Hixxy’s mural intends to showcase the vision for the future of Brentford, whilst also celebrating its distinctive history and current character. With a long sense of disconnect between the high street and the water, The Brentford Project – due for completion in 2027 - looks to reconnect the two via a series of pedestrianised yards and lanes, creating new spaces for people to come together as well as supporting the local economy. In total, The Brentford Project will deliver 876 new homes alongside a mixture of essential high street retailers and independent stores and boutiques, new public spaces and a variety of waterside restaurants, bars and cafés.

“I was thrilled to receive the commission from Ballymore to create a piece of artwork for the carpark building in Brentford. My aim was to create a positive, beautiful and uplifting image inspired by the local area, giving a very grey building an injection of colour and life!” John Mulryan, Group Managing Director at Ballymore, comments:

“We’re excited to be working with Hixxy on this artwork project. She has fantastic experience in creating interesting and creative murals across the country that speak to their local audiences in a culturally relevant way. Her work on the car park building will enliven the town centre with a new point of interest for residents and locals.”

The Brentford Project partners with Hixxy on Town Centre Mural