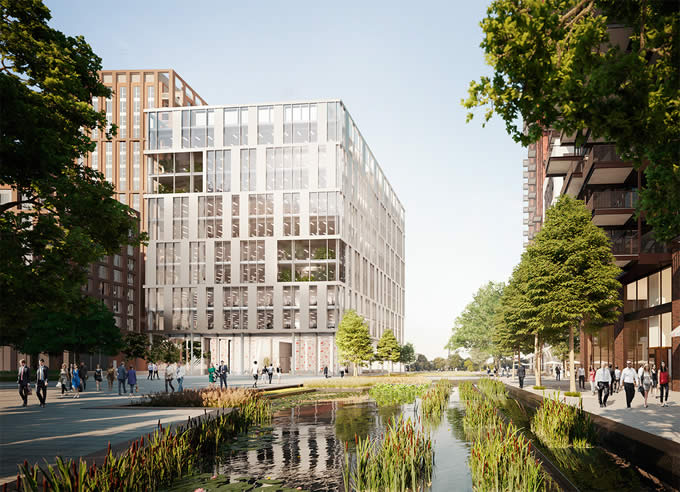 Ballymore has announced the vision for the second phase of Embassy Gardens, the residential development adjacent to the new US Embassy at the heart of Nine Elms on the South Bank.

Comprising 179 suites, one, two, three bed apartments and a stunning penthouse, the release of the second phase offers potential purchasers the opportunity to buy in one of London’s most exciting residential schemes. The first phase of Embassy Gardens sold out within a weekend and was heralded as one of the best-selling schemes in 2012 and with nearly three years since there was last an opportunity to buy, anticipation is high.

Set in the heart of the linear park, Embassy Gardens will be a landmark achievement in landscaping and a major new cultural attraction with a ribbon of green, tree-lined space that will run from Vauxhall to Battersea Park, providing al fresco areas for residents to enjoy as extensions of their inside space. The park will also include a number of new sculptures, which will be delivered by Ballymore and have been curated by Sir Norman Rosenthal, an independent curator and former head of exhibitions at the Royal Academy. Including works by Sarah Lucas, Simon Fujiwara and Mohammed Ashfaq, the new artworks will inject cultural vibrancy into Embassy Gardens and the surrounding area.

Heralded as London’s new diplomatic precinct, Embassy Gardens will reflect this with its use of stylish design and craftsmanship. The design style is distinctive, with the red-brick exteriors inspired by the historic meatpacking districts of New York, and with influences of London’s historic Victorian and Edwardian mansion blocks. Natural light will flood the apartments through floor to ceiling glass windows, while oak veneers and stainless steel kitchens are some of the high-specification finishes within each property. Taking influence from Soho lofts, the properties are large and open plan and many have striking views across the River Thames or overlooking the new US Embassy.

A sky deck at the top of the two buildings incorporates a spa, summer bar and Orangery and commands views of London icons including the Houses of Parliament and London Eye. The Orangery will bring the relaxed feeling of the Mediterranean to central London, allowing residents to lounge in a private space which brings the outside in.

The pinnacle of the development is the Sky Pool, a stunning suspended swimming pool which links two buildings at the tenth storey – the first of its kind in the world. Entirely transparent and structure-free, the pool will allow residents to swim from one building to the other – a 35m high aqua bridge in the sky.

The pool connects the Legacy Building to the EG:LE club; the exclusive private members club for residents of Embassy Gardens. Along with the Sky Deck, EG:LE club includes a private gym and yoga studio, a boxing ring, a private cinema called The Maureen O’Hara and a traditional private library and lounge area named after the Irish playwright The John B. Keane.

One of the leading developments in Nine Elms on the South Bank, Europe’s most significant regeneration zone stretching from Lambeth Bridge to Chelsea Bridge, Embassy Gardens will benefit from the £15 billion regeneration which will transform almost 500 acres of underused land into a thriving new area within central London, boasting retail space, 20,000 new homes, infrastructure, and community amenities. Embassy Gardens will sit adjacent to the new US Embassy and the Dutch Embassy – both of which are set to relocate to the area.

Nine Elms will be one of London’s best-connected neighbourhoods; the extension to the Northern line will be open by 2020, while Vauxhall tube and rail stations are just a five minute walk away from Embassy Gardens. A planned pedestrian and cycle bridge will improve links to the north bank of the river, connecting residents to Belgravia and Pimlico in minutes.

Sean Mulryan, Chairman and CEO of Ballymore Group says, “The release of the second phase of Embassy Gardens follows the huge success of our first phase in 2012. With the unveiling of our striking Sky Pool earlier this year, we set the tone for the second phase of this unique development which leads the way in innovation and design excellence.”