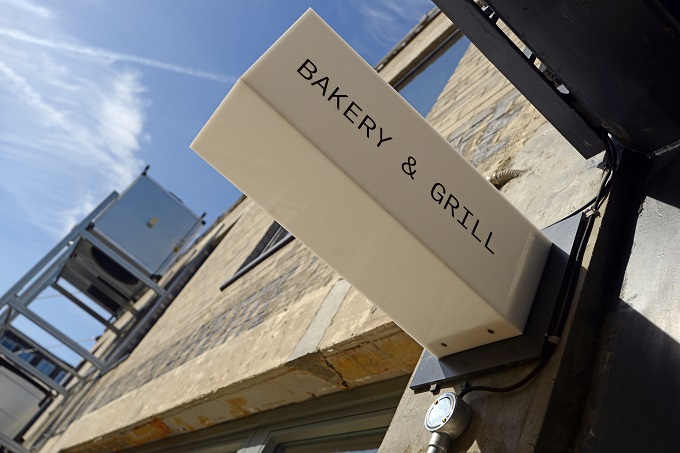 Rye by the Water is the new bakery and grill from Ben Rand, former Head Chef of SW4 favourite, The Dairy, and Janine Edwards, previously the Head Pastry Chef at Little Bread Pedlar. It is the latest opening supported by esteemed Irish chef and restaurateur, Robin Gill and business partner, Dan Joines. Ben’s produce-led approach and Janine’s expertise in artisan baking will culminate in a simple yet refined offering where less is more. Expertly sourced produce is a key focus with stoneground flour made with heritage grains from Gilchesters Organic used throughout the bakery.

Situated at the end of Catherine Wheel Road in Brentford overlooking the canals and local waterways, the space features a bakery and restaurant with an idyllic decking area to enjoy coffee, pastries, brunch, lunch and dinner. Signature bakes will also be available to take away. A naturally leavened sourdough will be the primary loaf from Rye by the Water, whilst the bakery selection will include croissants, pain au chocolat and seasonal fruit Danish pastries, all of which are laminated and baked in-house.

Rye by the Water will open its doors early each day with freshly baked pastries, teas and coffees available from the counter. The team is taking its coffee offering seriously and have teamed up with Caravan Coffee to create a collaborative blend. Lunchtimes from the counter will offer a daily-changing selection of sandwiches and seasonal salads.

Evenings will see the team fire up the grill for a concise menu of snacks, pastas, steaks, sides and pizzas. Expect ‘Cornish mackerel crudo with English peas and Amalfi lemon’, ‘Tagliatelle, Cornish crab, tomato and basil’ and ‘Dexter beef chop with green salad and Agria potato gratin’. Neapolitan-style sourdough pizzas from the woodfire oven will include ‘Fennel sausage, Calabrian chili, tropea onion’ and ‘Courgette, ricotta, oregano, black pepper’. A concise but considered list of wines, beers and cocktails will be available, featuring Dan’s own Vault Vermouth, and notably the house spritz of Vault Vermouth Rosso, Select Aperitivo, Prosecco and Rosemary.

‘We are looking forward to bringing a new and exciting restaurant to Brentford and connecting with the local community through our love of baking, amazing produce and simple, yet considered cooking.’

Rye by the Water forms part of the Ballymore development in Brentford on Catherine Wheel Road and will open its doors for soft launch from Tuesday 25th June. Throughout the soft launch period (25th June – 6th July), they will be firing up their ovens and growing the menu day by day. ‘Sit-in’ tables will be offered 10% off their bill during these dates. They will be fully open from Monday 8th July.

More about the Rye by the Water team

Ben’s childhood in North Norfolk and the surrounding countryside gave him an early education in farmed and wild produce. His interest in cooking began during school holidays working at a local restaurant. Initially seeing cooking as a way to see the world, his passion evolved and resulted in a career that led to winters cooking in the Alps and summers spent honing skills in Portugal. He then spent short stints in some influential kitchens including St. John Bread and Wine and In De Wulf in Belgium where their use of fermentation, over-fire cooking and whole animal cooking helped to shape his approach.

Ben was a major part of The Dairy’s success as one of the members of the opening team and grew with the restaurant, working his way up to take the reins as head chef in January 2018. For Ben, cooking is not just about being in the kitchen but also exploring the producers, suppliers and processes behind every ingredient that appears on his menus. Ben was shortlisted for the YBF chef of the year in 2018.

Janine was born and grew up in South Africa. Her love for food was sparked through school holiday work at a local family-run French restaurant. Armed with a Cordon Bleu qualification in hand, Janine made her way to Cape Town to work at the world acclaimed Tasting Room in Franschoek. This led her to move to the UK in 2008 and on to the kitchens of Restaurant Andrew Fairlie in Scotland and Arbutus Restaurant in London.

Inspired by her love of simple, regional cooking and uncomplicated flavours and techniques, Janine moved from fine dining into bistro style cooking and worked at La Fromagerie. In 2014 Janine joined The Dairy team to open the Delicatessen.

For the past three years Janine has worked at Little Bread Pedlar. She looks forward to connecting with the local community through here love of baking.

Celebrated Chef Robin Gill’s career began in some of Europe’s best restaurants, from Marco Pierre White’s three Michelin-starred The Oak Room, to two Michelin-starred Don Alfonso 1890 on the Amalfi Coast. Back in the UK, Robin spent 4 years under Raymond Blanc at Le Manoir aux Quat’Saisons before staging at some of world’s best restaurants including Noma and Frantzén.

In 2012, on his return to London, Robin and his wife Sarah discovered a ramshackle building in Clapham that was to become The Dairy, opening to critical acclaim on St Patrick’s Day in 2013. Robin’s family of Clapham restaurants now includes Counter Culture, a snack bar with just 15 seats, and Sorella, a local Italian restaurant inspired by Robin’s years spent working on the Amalfi coast which was awarded a Bib Gourmand by Michelin in 2018. His most recent opening in May this year was Darby’s Oyster Bar, Bakery and Grill in Nine Elms. Robin has also appeared as a judge on Masterchef Ireland and published his first cookbook, Larder in 2018.

‘Rye by the Water’ launches in Brentford