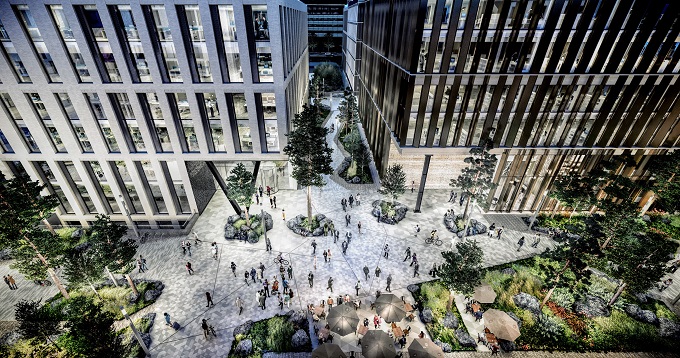 Dublin Landings, a new urban quarter for the city’s Docklands, has been awarded a 2021 Excellence in Placemaking Award.

The ceremony, hosted by ULI and CBRE on 23rd November, celebrated best practice in placemaking in the Irish market, with Dublin Landings crowned the Private Sector Development of the Year.

It was in 2021 that Ballymore completed its work here, creating more than 1 million sq ft of workspace, anchoring a new commercial heart for the Irish capital, one also filled with well-planned outdoor space, shops, amenities and new homes.

Pat Phelan, Managing Director for Ballymore Ireland, said: “We are delighted to win this award – a testament to our efforts in breathing new life into this area of the Irish capital.

“Dublin Landings is real placemaking in action. It is somewhere in which we have transformed a disused, rundown area of the city – creating a new, well-designed district which has appealed to big name organisations like the Central Bank of Ireland, NTMA and We Work.

“I would like to congratulate all involved in the project on this deserving accolade.”

The award is the second in a year for Dublin Landings after the Irish Planning Institute bestowed its Best Design accolade onto the scheme in 2020. A full list of Ballymore awards can be viewed here: Achievements | Ballymore; and, to find out more about the CBRE ULI awards click here: ULI CBRE Excellence In Placemaking Awards | CBRE.

Excellence in Placemaking at Dublin Landings