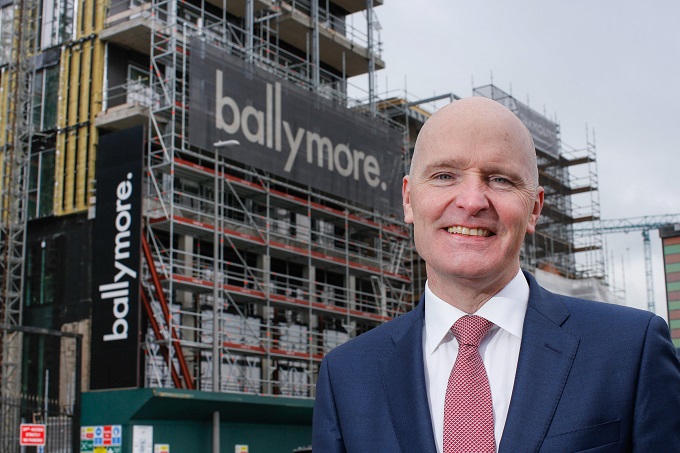 10 April 2019 – Dublin, Ireland: The Ballymore Group has announced the appointment of Paul Carty as their new Director of Construction in Ireland. In his new role, Mr Carty will support the growth of Ballymore’s growing Irish development portfolio whilst at the same time developing the Ballymore team in Dublin.

With over 31 years’ experience in the construction sector, Mr Carty started his career at John Sisk & Son as a Senior Quantity Surveyor where he spent 14 years. Prior to joining Ballymore, Mr Carty was a Regional Director at JJ Rhatigan & Company with responsibility for the Dublin and Leinster regions. In this role, Mr Carty ensured the company continued to perform strongly and maintain its reputation as one of Ireland’s leading Tier 1 contractors. He worked on many landmark projects including Lansdowne Place, Heuston South Quarter, and UCD’s Student Residences Masterplan.

Announcing the appointment, Sean Mulryan, Chairman and Group CEO of Ballymore said: “Ballymore has long recognised that its strength and success is driven by its workforce and is committed to attracting and retaining the best industry talent. Paul has a wealth of experience and knowledge from a highly successful career in the sector and will bring new ideas and a fresh way of thinking to our projects in Ireland. Paul is an outstanding addition to our leadership team in Ireland.”

Ballymore’s Irish commercial portfolio includes the landmark Dublin Landings project, a 1 million square-feet mixed development of offices, apartments and shops. Dublin Landings’ is already home to the Central Bank of Ireland, the NTMA, and WeWork. In addition, Ballymore is continuing its plans for the Connolly Quarter, a mixed-use development of offices, a hotel and apartments, which when complete will also be in excess of 1 million square-feet.

Ballymore is an independently-minded property developer with a multi-award winning portfolio of some of Europe’s largest urban development projects. A privately-owned company, Ballymore was established by founder, Chairman and CEO Sean Mulryan in Dublin in 1982.

The company has the flexibility to identify opportunities, pursue challenging projects and make bold decisions. Ballymore owns significant land across the UK, Ireland and Europe, capable of delivering an additional 9,500 homes and has £2.6 billion in forward sales. It currently has around 3.4 million sq. ft. of commercial space and 4,745 homes under construction in London.

Taking a visionary approach to development and place making, Ballymore’s projects are renowned for best-in-class design and innovation, winning 40 top industry awards in the last three years alone. The business’ resolute commitment to quality is embedded in every detail of its projects. From conception through to delivery and then estate management, Ballymore maintains the quality its residents and tenants expect, and is one of the only developers in the UK that has its own estate management teams.