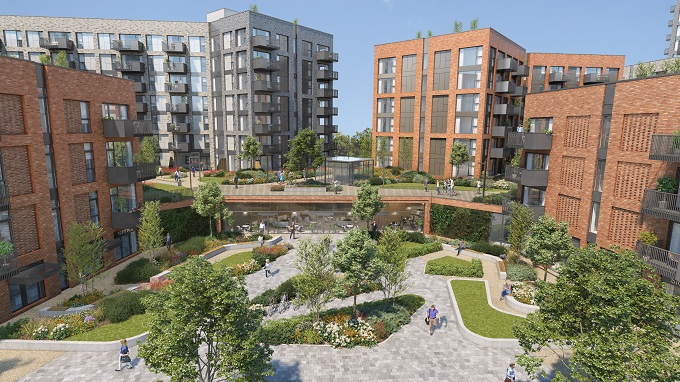 29 March 2021: Ballymore has today announced the appointment of Patrick Phelan as Managing Director and Linda Mulryan-Condron as Deputy Managing Director of Ballymore in Ireland. These leadership appointments in Ireland are in response to increased activity in both suburban housebuilding and in several key mixed-use developments in central Dublin.

Formerly Ballymore’s Director of Corporate Finance, Patrick is a real estate professional with broad experience in the UK, Ireland and the US, acquired over a 25-year career. Prior to joining Ballymore, Patrick was a Director with CBRE. Previous employers include the NTMA, JPMorgan Chase, Bear Stearns and PwC.

Announcing the appointment, Sean Mulryan, Chairman and Group CEO of Ballymore, said: “We have invested significantly in our Irish landbank over recent years, having acquired a number of large sites for residential and mixed-use projects. In this newly created role, Patrick will manage the execution of Ballymore’s growing Irish development portfolio whilst enhancing the existing Ballymore team and skillset in Dublin.”

Linda, who joined Ballymore in 2015, will become Deputy Managing Director for Ireland. Linda and has spent the last three years as the Group’s Operations and Communications Director and has previously focused on customer journey in the UK business. Prior to joining Ballymore, Linda spent 7 years as a behavioural neuroscientist in the pharmaceutical Industry.

Welcoming the announcement, Patrick Phelan, said: “Ballymore has a deserved reputation as a leading developer, delivering both high quality affordable homes and iconic urban developments. Linda and I look forward to building on the success of our Irish team, strengthening our existing partnerships with customers, investors and our funders. We have immediate opportunities to deliver contemporary city living, alongside retail and office space in historic locations such as St. James Gate, Connolly Station and promising new acquisitions on the waterfront in Bray. We continue to invest in the most desirable and sought-after suburban locations such as Malahide, Naas, Leixlip, Newbridge and many others. We welcome the opportunity to grow further and build new relationships with those who share our vision.”

With suburban residential developments in Naas, Newbridge and Bray, Ballymore is also continuing its plans for the Connolly Quarter, a mixed-use development of offices, a hotel and apartments, and partnering with Diageo to create a visionary neighbourhood for living, entrepreneurship, creativity and commerce at the Guinness brewery at St James’s Gate.