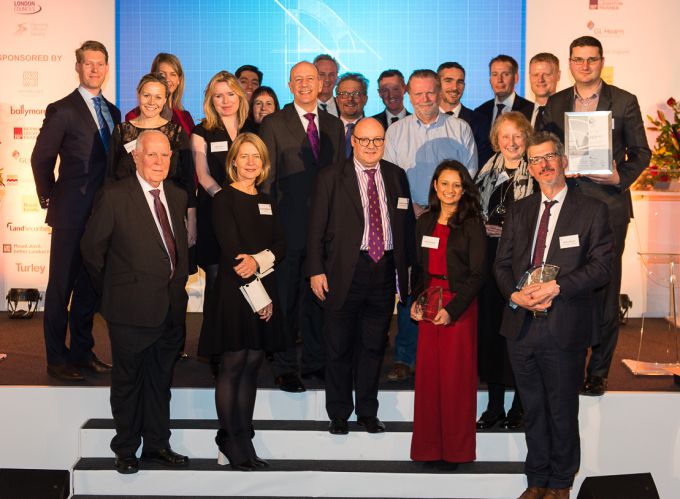 London’s most ambitious and innovative development projects have been celebrated at the 2017 London Planning Awards.

The night’s winners include the Peckham Coal Line, a grassroots project creating a new community park from a disused coal line; the Deptford Project, which has transformed a railway goods yard into a vibrant space for local businesses, cafes and homes; and the Francis Crick Institute, a pioneering partnership that brings six of the world’s leading biomedical research organisations – the Medial Research Council, Cancer Research UK, the Wellcome Trust, UCL, Imperial College London and King’s College London - under one roof.

Now in its 14th year, the London Planning Awards are organised by London First, in partnership with the Mayor of London, London Councils, the Planning Officers Society and the Royal Town Planning Institute.

Jasmine Whitbread, chief executive of London First said: “These awards show off the alchemy of London as it thrives and expands: railway sidings into elevated parks; empty spaces into pop-up restaurants; new spaces for scientists to push their benches together to tackle disease. As the city grows towards 10 million people, we are going to need a massive wave of ingenuity and innovation to keep up, and that’s why we work with the Mayor every year to celebrate the achievements of planning in London.”

Deputy Mayor for Planning, Regeneration and Skills, Jules Pipe, said: “The projects recognised at this year’s awards are incredibly impressive in terms of the quality of their design and the level of ambition. As London continues to grow we need to ensure our built environment responds to the challenges this brings – and does so in a way which recognises London’s unique heritage and minimises the impact which development has on the environment.”

The winners of the 2017 London Planning Awards are:

A fantastic example of a locally driven project that is bringing a coal line back into use as a new space for community and cultural activity.

Wind modelling of the Eastern Cluster, presented by City of London

Demonstrating how 3D technology can transform the understanding of London’s urban environment and deliver better outcomes for planning, designing and building in the city.

The Deptford Project, presented by London Borough of Lewisham and U+I Group PLC

14 truly local businesses have taken space in the historic railway arches. With Deptford’s heritage at its heart, this scheme has regenerated the town centre and delivered 132 new homes and new commercial and retail spaces.

A new neighbourhood providing 1700 homes, new public spaces and public art exhibits and a new home for both the London Film School and English National Ballet.

For its cutting edge and cost effective approach to addressing the housing crisis for homeless families, high residential and overall design quality.

A pioneering partnership between six of the world’s leading biomedical research organisations - the Medical Research Council, Cancer Research UK, the Wellcome Trust, University College London, Imperial College London and King’s College London – all brought together in one building. The institute aims to respond to fast-moving changes in the medical sciences by facilitating collaboration and accelerating the translation of scientific research from the laboratory to hospitals and pharmacies.

For its innovative reuse of a former basement carpark to provide accessible and high quality workspace.

A new area of high quality landscaped public space in London’s West End. It provides a haven for local residents, visitors and workers to sit, dwell and take time out from the bustling streets around. A real hidden gem.

Quadrant 3, presented by The Crown Estate, Dixon Jones and CBRE

For its strong heritage-led approach, transformational effect it has had on this long neglected piece of London and catalysing influence on the wider regeneration works to King Cross.

This project transformed Walthamstow Town centre. It introduced a new cinema to Walthamstow alongside new food and drink spaces, creating a thriving daytime and new night-time destination. A truly successful mixed use scheme with housing and landscaped amenity space.

Southwark has demonstrated innovative approaches to both plan making and decision taking, particularly in the delivery of 11,000 new council homes for the borough.

Wind modelling of the Easter Cluster, presented by City of London

Cllr Darren Rodwell, London Councils’ executive member for city development, said: “These awards are a great opportunity to showcase the excellent work being undertaken by boroughs to transform the capital and ensure we are meeting the needs of residents. We are facing ever-increasing pressures on housing and this is a real example of councils pulling their weight and doing what is needed to make sure we are maximising the economic, social and environemnetal value of new developments. The winners in all catagories can be proud of the work they are doing to enhance our city.”

John Walker, Secretary of the Planning Officers Society London, said: “The London Planning Awards goes from strength to strength. The range of innovative award winners demonstrate the planning profession is extremely adaptable to new ideas and also ensures they are delivered on the ground. Once again the quality of entrants was outstanding and collectively they make London a better place to work, live and play in. These award winners are playing their role in ensuring London keeps its reputation as the best and most adaptable City in the World.”

Stephen Wilkinson, president of the Royal Town Planning Institute, said: “The projects recognised by these awards demonstrate the breadth and diversity of our profession. Planners continue to create better places and improve the well-being of London’s communities.”

The awards were presented at a ceremony at City Hall on 27 February 2017.