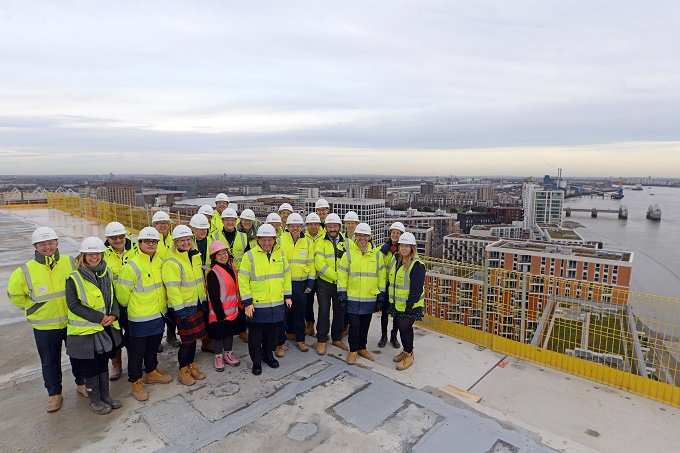 [London: 18 December 2019]: Ballymore and Oxley celebrated a landmark moment today as the final, and tallest, residential building at Royal Wharf officially topped out. The major urban regeneration scheme, which will ultimately deliver 3,385 new homes, represents a new town for east London, complete with health centre, pharmacy, primary school, nursery, community centre, and a high street and market square with 60 retail units. The masterplan has been designed by Glenn Howells Architects.

A topping out ceremony took place this morning, attended by Sean Mulryan, Chairman and Group Chief Executive of Ballymore, and representatives from Oxley, as well as instrumental members of the construction and delivery teams at Ballymore.

Over 2,833 homes have been handed over to date, and when complete in 2020, the project will have been delivered at pace in an ambitious timeframe of over five years. The development has seen over 17,000 operatives inducted on site, with 25% local labour.

Sean Mulryan, Chairman and Group Chief Executive of Ballymore commented, “At Royal Wharf, we’ve delivered thousands of new high-quality private and affordable homes with incredible haste. When we complete next year, there’ll be 3,385 incredible homes, right by the river, with almost 50% open space and fantastic public amenities – not just for our residents, but also for our wider community in Newham.”

Royal Wharf will soon be home for over 10,000 people. Its pace has been achieved due to a method of construction which was first brought to the UK by Ballymore. The technological innovation comprises insulated, structural components delivered to site with the façade treatment, doors and windows already installed in the factory. Use of this system has delivered significant construction time and quality benefits over the on-site, in situ alternatives. The Byldis system also provided an acoustically efficient solution to stringent external noise conditions imposed by the site being in close proximity to a working river wharf.

A new town for Newham

In addition to the social infrastructure that has been delivered, residents also benefit from a 20,000 sq. ft. leisure facility, designed by David Morley Architects, complete with 25m pool and gym.

Royal Wharf takes advantage of close proximity to both Pontoon Dock and West Silvertown on the DLR, and Canning Town on the Jubilee Line, which enables residents to reach the West End in 20 minutes, Canary Wharf in five minutes and London City Airport in two minutes. The newly opened Royal Wharf Pier, delivered by Ballymore and Oxley in September earlier this year, is serviced by Thames Clippers river bus service, and is London’s newest riverboat terminal.