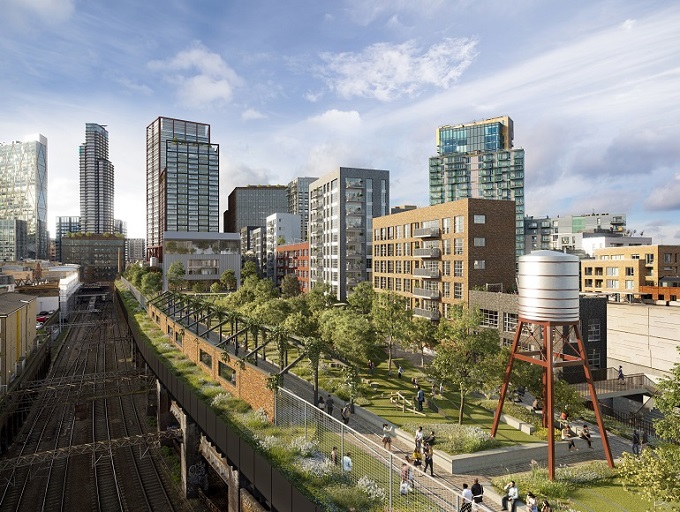 The joint venture between Hammerson and Ballymore has submitted revised plans to the Greater London Authority (GLA) for the regeneration of the Bishopsgate Goodsyard to create an exemplar 10 acre mixed-use scheme in the heart of Shoreditch, east London.

The plans, which are being submitted as an amendment to the existing planning application for the site, follow an extensive public consultation and constructive discussions between the joint venture, the GLA, Hackney Council, Tower Hamlets Council and other key local stakeholders.

The revised plans provide for 500 homes, of which 50% will be affordable. This is an increase on the 15% affordable previously proposed under the existing application, which was submitted in 2014.

The scheme will also provide 1.4 million sq ft of workspace in five buildings, including around 140,000 sq ft of affordable space - one of the largest single contributions of any development in London.

The development will also provide a high line-style public park sitting on top of the restored railway arches that will include a series of connected gardens, terraces and walkways, with a wide variety of biodiversity, including trees and planting. The park will be a fantastic benefit to Shoreditch and London, providing a range of environments and spaces to suit the requirements of all stakeholders. In total, the site will have over 6 acres of public realm, 25% larger than originally proposed and covering over 50% of the whole site.

Upon completion, the scheme will make a significant contribution to the local area and London, supporting over 8,300 jobs worth over £600 million to the economy, as measured in Gross Value Added (GVA).

Following the acquisition of the site from Railtrack in 2002 and the completion of the London Overground and the opening of Shoreditch High Street Station in 2010, the joint venture has been working to deliver a scheme that would transform this strategically important site, which has been derelict since a fire in the 1960s.

Other key elements of the revised planning application include:

• There has been a reduction in overall height and scale across the whole site. In particular, the heights of residential buildings along Sclater Street have been significantly reduced.

• Majority of the site’s heritage and all listed structures retained, with the listed Braithwaite Viaduct arches opened to the public and the Oriel Gate restored to become the ‘gateway’ entrance to the site from Shoreditch High Street.

•The restored Braithwaite Arches will provide exciting new spaces for retail and restaurants with the opportunity within the scheme for over 100 emerging and independent businesses.

• A destination building for cultural space on Brick Lane, which the joint venture will continue to consult with the local community and stakeholders on its delivery and potential users.

Nicola Zech-Behrens, Senior Development Manager, Ballymore, said: “Bishopsgate Goodsyard is a highly challenging site with a large number of constraints but offers an incredible opportunity. We have listened very carefully to feedback on our original application and aspirations of the local community and our revised plans provide for a more balanced development that preserves and showcases the site’s heritage. Our proposals will create an exemplary urban quarter, with a mix of housing types, half of which will be affordable, as well as workspace, shops, cafes and restaurants, exhibition space, a cultural building and a new public park.”

Tony Coughlan, Development Manager at Hammerson, said: “We are we excited to bring forward these revisions to our plans, which promote a more sensitive scale of development for this strategically important site. With a focus on the delivery of a wide range of new workspace opportunities, including one of the largest ever provisions of affordable workspace in London. Our revised proposals will generate thousands of jobs and support local economic growth, creating a vibrant urban quarter that respects the heritage of its location.”

The revised application follows the submission of the JV’s comprehensive plans for the development of the site in 2014, which comprised 1,356 new homes, 700,000 sq ft office space and 180,000 sq ft of retail space. In May 2015 the application was ‘called in’ by the then Mayor of London Boris Johnson, with the Greater London Authority (GLA) assuming the role of Local Planning Authority for the application. In 2016, the GLA’s officer report recommended the planning permission should be refused. The Mayor agreed to defer the determination to allow the JV further time to evolve the design and work with the GLA planning officers and the boroughs to respond to comments.