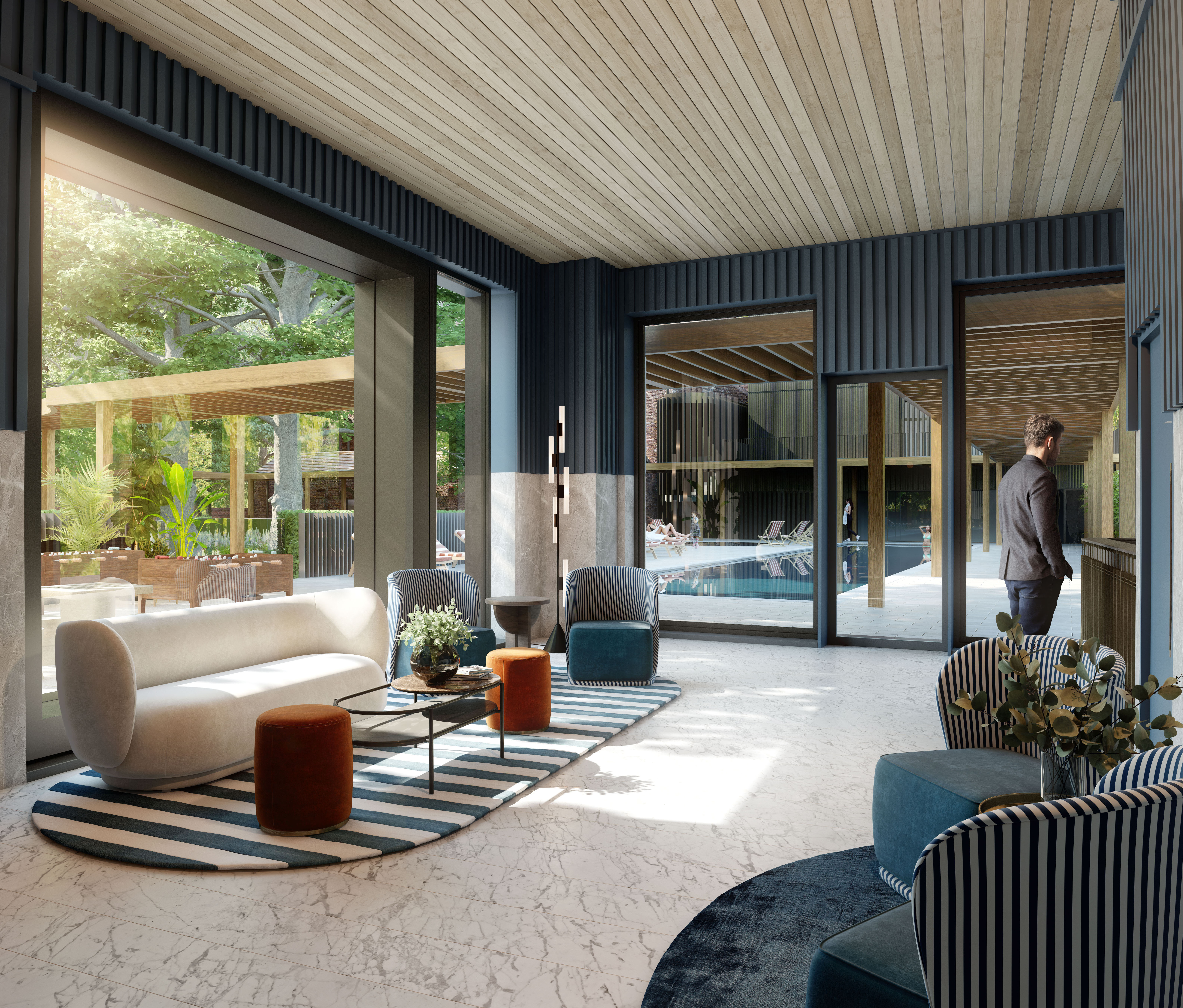 This September, a new collection of town centre apartments will come to the market at waterfront neighbourhood, The Brentford Project. Following its successful launch in September 2019, developer Ballymore has brought forward the latest opportunity to live in this exciting new quarter, in a new green phase for the development.

Perfectly positioned on the doorstep of west London’s famed parks and green spaces, this new collection of two-bedroom apartments at The Brentford Project benefit from river views across to Syon Park and beyond. A focal point for the development, the newly-released apartments will also overlook the beautiful gardens of the deconsecrated Grade II* Listed St Lawrence’s Church on site, which is set to be reimagined with tranquil landscaping for residents and locals.

Uniquely located at the meeting point of the River Thames and River Brent, The Brentford Project will see the transformation of 11.8 acres in the very heart of the town. Alongside delivering 876 new homes, the major regeneration scheme will revitalise the southern half of the town’s high street and reconnect it with the waterfront, establishing a thriving mix of dining, entertainment and shopping amenities and public spaces.

The first apartments to come forward within the new building, which will also act as the home for the residents’ club and concierge service, residents are perfectly placed to take advantage of the impressive lifestyle and wellness facilities on their doorstep.

Contemporary open-plan apartment layouts and floor to ceiling glazing – alongside the cantilevered terraces many homes enjoy – are thoughtfully designed to maximise the far-reaching views, which take in the neighbouring St Lawrence’s Gardens, the water and the greenery of west London.

Reflecting Brentford’s green, leafy surroundings, residents and visitors will be welcomed into an ‘Arrival Garden’. Inside, a tranquil retreat that has thoughtful landscaping and covered walkways and porticos, alongside a residents’ outdoor pool and woodland play space surrounded by mature trees. This charming pocket of The Brentford Project will also house ‘The Wick’, a unique wellness offering for residents, including a state-of-the-art gym, spa and treatment rooms overlooking the gardens.

Meanwhile, St Lawrence’s Church itself – a truly historic piece of Brentford’s past with aspects of the building dating back to the 15th century, designed by architect Thomas Hardwick – will become a culinary and cultural hub for the community, and play host to pop-ups, events and shows.

Internationally renowned practice, McCullough Mulvin Architects, has overseen the architectural design of the development’s new residential building and the revitalisation of St Lawrence’s Church – adopting a thoughtful approach to integrating this heritage gem into the wider vision for the new neighbourhood.

Alongside an invigorated stretch of the high street – which will be home to all the amenities desired for modern life – a series of distinctive pedestrianised lanes and yards will reconnect the high street with the waterfront.

Creating a new foodie destination, Workhouse Dock, an existing but neglected mooring on the River Brent, will be rejuvenated with 24 hour moorings, and lined with restaurants, pubs and cafés, with new public realm including tiered seating terraces – a space to relax, spend time and enjoy life on the water.

Complementing Workhouse Dock’s romantic connection to the river is the adjacent Waterfront Square, which extends the communal experience of life at The Brentford Project. A dedicated space for outdoor markets, performance and public events, Waterfront Square will add to Brentford’s strong community feel. Providing another unique perspective across the water, a series of raised podium gardens will be interspersed throughout Workhouse Dock.

An address with world-class connections

Despite its leafy position surrounded by the prized neighbourhoods of Chiswick, Richmond and Kew, Brentford itself is a powerhouse of business and creativity. The development is walking distance from the Great West Road, otherwise known as the ‘Golden Mile’, home to the UK headquarters of global titans including Sega Europe, Dell EMC, Sky Studios, GlaxoSmithKline and JCDecaux Group.

To the east, Chiswick Park hosts a suite of global, European and national corporations including Paramount, Sony and Starbucks. Creating a business community of its own, The Brentford Project already hosts classic car entrepreneur, Duke of London, and on-site bakery and restaurant, Rye by the Water with the future retail vision to include over 50 new shops, boutiques, restaurants and entertainment venues in order to create a new riverside destination in west London.

An important commuter corridor into central London, trains from Brentford to London Waterloo just taking 24 minutes, while nearby Boston Manor Underground station takes locals to Leicester Square within 32 minutes via the Piccadilly line. Heathrow Airport is also a mere 15-minute drive away by car for unrivalled international connections.

Jenny Steen, Sales Director at Ballymore, comments: “One year on from the launch of The Brentford Project, this new release of homes offers a fresh opportunity to become part of the thriving community and exciting destination that is in the making here in west London.

“The Brentford Project offers residents a rare lifestyle not often found in London. Not only are there some of the capital’s most beautiful parks nearby, but the extensive landscaping, public spaces and impressive variety of amenities throughout the neighbourhood will create a unique waterside destination. This new chapter of The Brentford Project provides the latest look at what is still to come in a constantly evolving neighbourhood - set amongst some of Brentford’s most historic surroundings.”

At time of writing, prices at The Brentford Project start from £410,000.

For further information on The Brentford Project, please visit: www.thebrentfordproject.com, or call the sales team on 020 3797 4875.