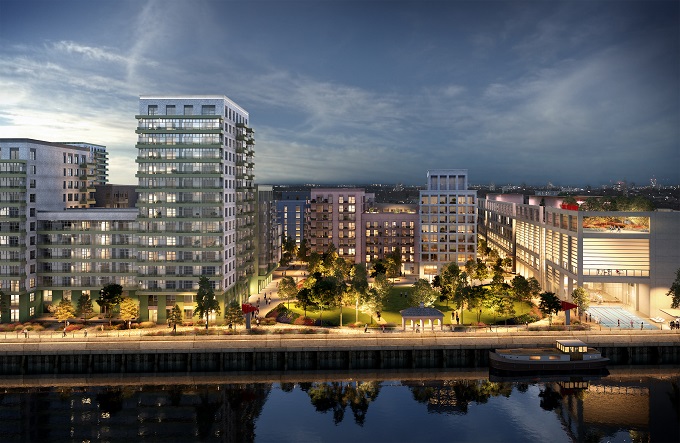 Ballymore has submitted a planning application for its latest major mixed-use quarter, UNEX-Thames Road Industrial Estate, on the riverfront in London’s Royal Docks, the company’s third scheme along this stretch of south-facing riverfront.

The plans for the 6.1-ha site envisage the creation of up to 1,610 new homes, including three-storey townhouses, lower blocks of six-to-nine storeys and taller blocks of between 15-to-18 storeys, as well as light industrial and commercial space and a two-form entry primary school. The proposal also features a major new public park along the river and community leisure facilities, such as a gym, outdoor pool, tennis court, rooftop running track and café.

The masterplan, designed by Glenn Howells Architects and HAL architects, was designed and evolved through a series of workshops with the GLA, London Borough of Newham, its Design Review Panel and other key commercial and local stakeholders.

The design for the scheme takes its inspiration from the site’s riverfront location and the large number of art deco buildings nearby. It also reflects the site’s urban context and industrial heritage, aiming to consolidate the new neighbourhoods around Pontoon Dock and Silvertown Quays Station, while providing an effective transition to the strategic industrial land to the east, which is home to Tate & Lyle’s London sugar refinery.

The proposed new development will improve and celebrate the riverfront by providing public access to all of the riverside across the site, creating a new destination fronting the Thames.  It will encourage sustainable travel, as new pedestrian links and cycle routes will connect to the Thames Barrier Park and Royal Wharf while it is an eight-minute walk to the Pontoon Dock DLR station only a short journey to London City Airport.

The site is currently occupied by several industrial warehouses, a concrete batching plant and a scrap yard. It was identified as suitable for mixed-use development in the Newham Local Plan 2018.

“We look forward to continuing the regeneration story of this area of London as we have been able to define much of Newham’s riverfront through our Royal Wharf and Riverscape developments.

“As well as providing much-needed new homes for London, our vision is to create an area that excites and inspires, opening up the riverfront for everyone and forming a vibrant, dynamic and amenity-rich new neighbourhood.”

If planning is successful, construction is estimated to start in 2023, with the site anticipated to complete 2027.