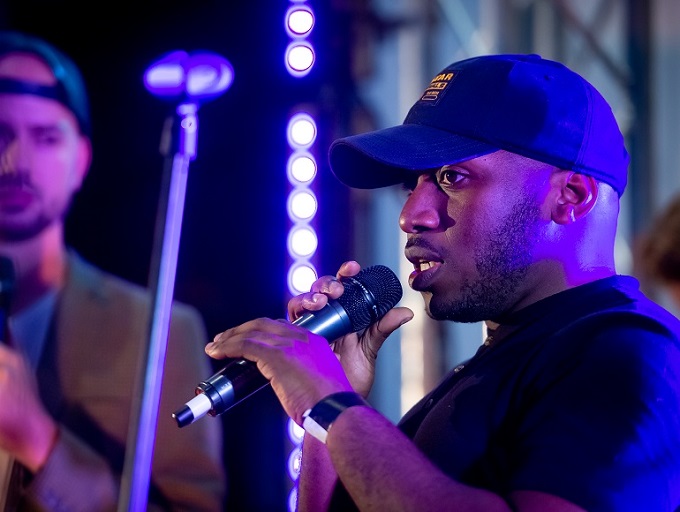 London: 12 May 2020 – East London’s creative and culturally-inspired neighbourhood London City Island has teamed up with onsite music production company Three Bears Entertainment to launch The City Island Podcast, a podcast series for creatives by creatives that promises to inspire, entertain and educate during this lockdown period.

With the majority of summer festivals and gigs already cancelled (including Glastonbury’s 50th anniversary), labels, venues, artists and road crews are all under huge financial strain. With a different celebrity guest star each week, the podcast series will offer support to the UK’s creative industry during this difficult time and raise money for the charities close to their hearts that have been affected by the pandemic.

The first series of City Island Podcast focuses on the narrative of ‘home’ and is set to welcome some of the UK’s hottest artists across six episodes, each hosted by musician and founder of Three Bears Entertainment Dantae Johnson, Flex FM presenter Kiesha Fort Hercules, and co-anchored by award winning, Oscar shortlisted, London based music producer, Pete Boxsta Martin. The podcast series also brings a taste of what is to come for Three Bears, who have just launched a podcast room at their new The Woods Studio located on phase 1 of London City Island.

Kicking off during Mental Awareness Week, the first series will provide light-hearted, jovial, entertaining content underpinned by award winning talent sharing their tips to ease coronanxiety and their own diverse stories of getting through lockdown. Each star guest will share their at-home essential Spotify playlist, discuss their charity of choice and encourage listeners to donate, and answer a series of questions centred around home. Please find an overview of the Series 1: Home programme below

Episode 1: Three Bears and City Island – Release date: 14 May
The series will commence with an introductory episode with live call ins from LCI guests and residents. Lilly and Dantae will talk about The Woods Studios, Three Bears Entertainment and London City Island as well as discuss why they decided to start the podcast

Episode 2: Dalton Harris – Release date: 21 May
Winner of X Factor in 2019, Dalton is a rising young star in the UK music scene. Poverty-stricken with very little clear prospect this talented young man defied all the odds despite facing more life adversity than most would endure in a lifetime. Dalton’s chosen charity is Street Child, once especially close to his heart. Supported by The Duchess of York Sarah Ferguson, who will be featured on the podcast, Street Child are fighting to help 125 million school-aged children who are out of education worldwide.

Episode 3: Nile Wilson – Release date: 28 May
Episode 3 steps outside of the music industry with British artistic gymnast guest star, Nile Wilson. He won an Olympic bronze medal in the men’s horizontal bar at the 2016 Summer Olympics and was a world medallist as a member of the silver-medal winning British team at the 2015 World Artistic Gymnastics Championships, the first world men’s team medal in British gymnastics history. His nominated Charity is the Mental Health Foundation whose mission is to help people understand, protect and sustain their mental health.

Episode 4: Lily Mercer – Release date: 04 June
International DJ and Freelance Journalist Lily Mercer has been labelled a tastemaker by numerous artists, including Chance The Rapper, SZA and Anderson. Paak. She has played at festivals worldwide including Born N Bread, and for numerous brands, including Nike, Adidas and Billionaire Boys Club. She has been a regular voice on Beats 1 representing London, as well as her monthly show The Lily Mercer Show on Rinse FM/NTS (Friday 4-6pm GMT) playing the best upcoming and underground hip-hop. As a journalist who graduated with a first class honours in fashion journalism from London College of Fashion, she had made contributions to Wonderland, Dazed, i-D and Noisey, interviewing the likes of Wu-Tang Clan, Nas, Kendrick Lamar and many more as well as setting up her own magazine, Viper, in 2015.

Musician, entrepreneur and reality TV star Caggie Dunlop, has recently returned to the spotlight with her very own podcast series, Saturn returns. One of the original cast members of the series Made in Chelsea, Caggie left the show in 2014 to pursue a music career in singing and songwriting which she has been working on ever since.

Episode 6: Donel and Angels and Bandits – Release date: 18 June
Popular music performer Donel Mangena, is a pop singer who competed on The Voice UK in 2018. This exposure led to him developing a fan base on his officialdonel Instagram account, with over 80,000 followers. Angels N’ bandits are a band of young teens including four girls and two boys aged 15 – 17 who are managed by founders of the very successful pop groups The Wanted and The Saturdays. They have previously played the Avalon Café stage at Glastonbury festival 2019, Pub In The Park, Social In The City and various other prestigious venues including the Indigo at the O2, Cavern Club Liverpool, Hyde Park & Event City Manchester. Recently they have been working on their original music which is set to be released later this year.

The series will be available to stream via iTunes, Spotify & Google cast and you can see more on the partnership here

Home to resident creatives and local artists, London City Island is an exclusive riverside neighbourhood by Ballymore (phase one) and EcoWorld Ballymore (phase two currently under construction) comprising 1,706 residential units, high spec gym with an outdoor heated swimming pool, independent artisan restaurant The Grocer, shops, and district al fresco spaces used to show public art. A number of London’s leading cultural institutions have relocated to the island on Leamouth Peninsula, including English National Ballet as well as soon to open London Film School and The Line, championing City Island as much more than just a place to live. EcoWorld Ballymore’s commitment to investing in the arts has been applied to welcoming smaller creative organisations to phase one, with arebyte, Trinity Art Studios and The Woods Studio all now calling the Island home too. Residents in the creative industry are also looking to bring their business onto the Island as part of phase two, including a photographer looking to open a new gallery space and a fashion designer looking to open a new boutique.

A new lockdown podcast by creatives for creatives: The City Island Podcast