All the fun of the Dublin Fringe

Diverse, invigorating and exciting: that is Constance Harris’ verdict on Dublin Fringe Festival.

I find it fascinating that people who are passionate about living in cities love to cite all the things they can do in them — when the fact is most people don’t do any of them.

Dublin is rich in historical buildings and new quarters, theatres and galleries, venues and places, but when was the last time you ventured out and truly explored, or rediscovered, this majestic, mysterious, exciting capital of ours?

Throughout my teens and early twenties (the 1980s and 1990s respectively), I loved going out and about Dublin, discovering something new. Good or bad it didn’t matter, the adventure was what counted. Live performance was the stuff of Dublin life, be it music, stand-up comedy or new theatre. Yet, I forgot.

And I can’t tell you how many years I have planned to go to the Dublin Fringe Festival, and never gone. It has only been in existence for 25 years. Yikes.

It was time to change the story. So last Saturday night, I ‘fringed’ it with my bestie.

Dublin Fringe Festival 2019 kicked off on September 7 and runs until the 22nd. It is an eclectic concoction of exciting events, from new drama, stand-up comedy and live music, to creative collectives, polemic expositions, city walking tours and so much more, all happening over a two week period. (See www.fringefest.com for information and bookings.)

Apart from the excellent performances on offer and all at extraordinary value prices (tickets on average cost around a tenner), what further enriches the experience of the festival is that all the events take place in unusual and intimate venues all over the city. Thus, you don’t just see a new act, you connect with the city and the people around you in a new way.

Judging by the super-stylish, young and intelligent creatures that attended each event that I went to, twenty to thirty something is the age demographic that actively supports new arts and culture. There were a few risk-taking middle aged and older arts fans at each event who were wholly embraced by the younger crowd. Each and every event was hugely positive and inclusive in feeling.

As a strategy, I highly recommend going to several events in one day. Most acts are only an hour long and tickets are great value, so attending a few together guarantees an even more exciting and fun ‘fringe’ experience.

On my evening out, I saw Bodies of Water, created by Eoghan Carrick, Maeve Stone, Jonah King and Úna Kavanagh in the Chocolate Factory in Dublin 1; then Mother of God, Alison Spittle’s hilarious one-woman comedy show in the Royal Chapel, Dublin Castle; and ended with Black Jam at the Abbey Theatre, brought to us by Osaro and the Fried Plantains Collective, which featured exciting Irish and African musicians and performances.

The Abbey Theatre was literally rocked to its rafters by raw, energetic, new music. Special shout out to the brilliant young African performers from Balbriggan and Belfast who are now part of an exciting new music scene in London. Remember these names – Black Fish Collective, Princess, Demi Gosh, Dior Norf — these guys will be big in the future.

Neil Murray, one of the directors of the Abbey Theatre, was at Black Jam and said “We need to do more of this.” So Dublin Fringe Festival is not just a pretty face; it gets serious players sitting up and noticing new talent, considering new directions. At every event, one saw a producer, director or otherwise, scouting for the next ‘big thing’. Fringe is important.

Sean Mulryan, Chairman and Group Chief Executive of Ballymore, was at Jarlath Regan’s stand-up comedy show at the Abbey Theatre and explained why they felt supporting the Dublin Fringe Festival was important.

“The arts bring magic to a city. Dublin Fringe Festival brings an incredible energy and soul to unexpected places, much like our own Ballymore developments in Ireland and the UK. We’re honoured to be supporting the Fringe as the Principal Patron for the first time and we look forward to working with them as they champion emerging artistic talent to support grassroots culture in Ireland.”

"Dublin Fringe Festival is not just a pretty face; it gets serious players sitting up and noticing new talent"

Dublin Fringe Festival does champion emerging talent and it gives near-established talent an additional boost of support. It is discerning while retaining an essential, free-wheeling, risk-taking, non-commercially focused, nature. All of life is scrutinised by the young and not so young artists; explored, dissected and presented in such a way as to make us think while giving us a laugh, or making us cry.

Constance Harris is a writer from Dublin. She was Fashion Editor of the Sunday Independent for over 20 years; before that she was a producer in film, television and media industries. 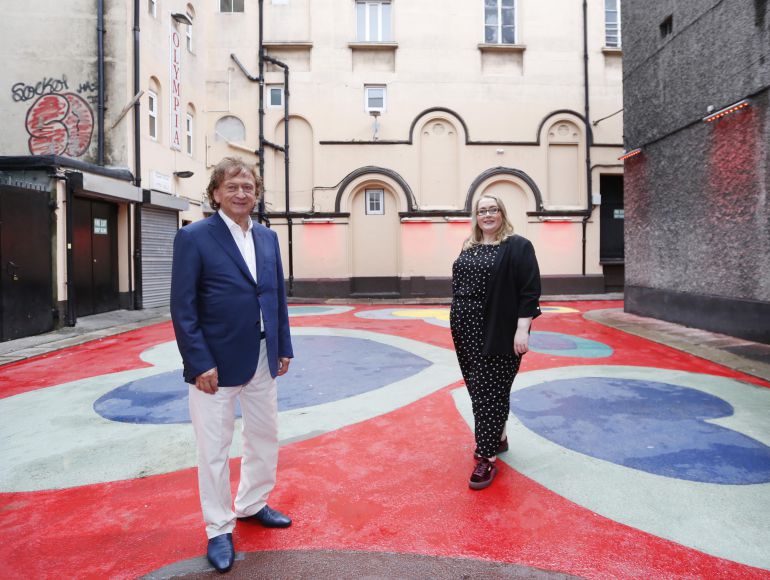 Ballymore is to be Principal Patron of the 2019 Dublin Fringe Festival, the annual arts festival that prides itself on developing new talent

Unity Arts Festival is a weekend of exhibitions, installations and workshops celebrating the creativity and energy of east London’s most exciting new neighbourhood.

A fantastic series of summer events have arrived at London City Island and Goodluck Hope.